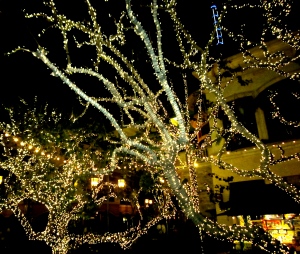 New Year’s Eve: one final night to see the holiday lights this year.

Tomorrow, the holiday decorations will come down, and I’ll be finished with rich food, large portions and over-indulgence for a while. This is my last post of 2014, and as I reflect on the year as a whole, I believe that it was one of the greatest years of my life. I don’t like the term “New Year’s Resolutions,” but I do make a list, which I refer to as my agenda. For my 2014 agenda, I made a list of 30 things I wanted to accomplish. I reviewed them every few months, and this year I got 17 of them done. That’s more than half even though I’ve ended previous years with better percentages.

I have a few bad habits, but I’ve learned to live with the ones that I absolutely can’t get rid of like procrastination, which is the biggest one that affects the most areas of my life. Except for eating, I don’t over-indulge in any particular activity with any regularity. No one has ever said to me, “You need to stop exercising so much!” or “You’re becoming obsessive about cleaning the house. You need to take a break!” If things get too dusty, I close the curtains and try not to notice.

I’m fortunate that I never took up smoking if for the simple reason I don’t have to make a grand announcement at 11:45 every New Year’s Eve: “Attention everyone! When the clock strikes twelve, I’ll have had my last cigarette. The very last one. Forever. I know what you’re going to say, but I mean it this year. My final cigarette.”

If I’ve learned anything at this point, it’s best not to comment on these pronouncements made by friends. One woman I know made such a production for years, and two weeks later she’d be sitting outside her store having a smoke on a bench. She knew I’d been there when she claimed supremacy over her tobacco addiction, but when she saw me, she’d quickly extinguish and explain: “I received a spiritual message that it wasn’t time for me to quit,” before igniting another Daisy Menthol Light.

When I was a kid, there was an elderly couple that worked for my dad. When I write that, they may not have been all that old since I was seeing them through ten year-old eyes. They had gray hair, moved slowly and both, as my mother would say, were swarthy as pirates. Whatever their jobs were, the only thing I ever saw them do was sit next to each other and chain smoke. The husband was a crotchety old thing who wasn’t much interested in my conversation, but his wife Della appeared to hang on my every word whenever I came around. I doubt that now, but at the time, she always seemed willing to listen.

I found her equally interesting not because of anything that I remember her saying, but because I could probably count on one hand the number of times I saw her without a cigarette. Sitting with her was like watching a Lauren Bacall film in color. Della was always in “soft focus” with the swirls and graceful arcs of smoke framing her wildly patterned polyester clad body, which was incredibly thin. To say that she was malnourished would be an understatement. She lived on black coffee from a thermos, two Baby Ruths and a 4:00 Coca-Cola.

Except for the 10 a.m. candy break and the one that accompanied her Coke, her vermillion lips were always wrapped around the end of a Doral like she was sucking a milkshake through a short straw. The lung capacity on that skinny woman was incredible. She could take a 13-second drag, hold it for eight and exhale for seven. If you were looking at her, you’d swear the fog was rolling in from somewhere.

Della and her husband shared a single black ashtray that sat on the desk they seldom used. There were no papers laid on the desk to work on, and they never used the stapler or the calculator or any office supplies. They mainly greeted customers and answered the phones if no one else picked up. When they weren’t talking to each other about the things that people talk about after 40 years of marriage, they sort of stared out the window, and I always wondered what they were thinking as they puffed away with those vacant looks on their drawn faces.

I rarely saw Della light her own cigarette with a lighter. Her husband would light the first upon her late arrival to work, and after that, she would get the next one started by touching the dying one to the fresh one in her mouth. She probably never realized it, but there was a specific way in which she changed cigarettes.

As she neared the end of the one she’d been working on, she’d reach into her purse with her right hand and pull out another from the gold chain-mesh case with the clasp that was never closed. She would tap it just so, and then with her left hand, she’d pull the dying cigarette out of her mouth and place it on the edge of the ashtray. She would then move the new cigarette from right hand to left, and place it in her mouth where it stuck out with no other assistance. With her left hand, she would take the dying cigarette from its resting place, switch hands and light the end of her fresh cigarette.

The changing of the ciggy ritual didn’t stop here. At the point her fresh indulgence was lit, she would swivel to her left and extinguish the old cigarette with her right hand, swivel back, remove the new cigarette with her left hand, place it in the ashtray and get out her lipstick. She would apply a fresh coating of that red enhancement as if she were going out for the evening. She then placed the tube back in her handbag. Once she was ready, she retrieved her cigarette and smoked it down until she repeated all the previous steps.

I noticed almost immediately that she didn’t appear to have any lips at all without lipstick. She must’ve gone through the stuff like she went through those Dorals. If there was any benefit to the lipstick, it was that you could tell immediately which were Della’s butts in the tray, and which ones belonged to her grumpy husband. 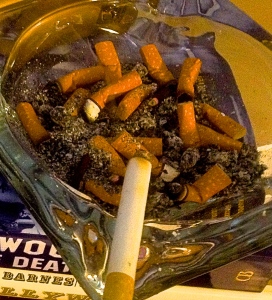 A morning’s worth of Della’s smoking, but hers would’ve had lipstick all over them.

Since I would never have insulted Della and didn’t mind bothering the husband, I asked him point blank when we were alone one day if the smell of that stuff ever bothered him. “Well, as a matter of fact, Della got up early on Saturday morning. She lit one up in the kitchen, and I could smell it back in the bedroom. I thought it stunk, so I got up. Once I lit my own, I never noticed it again. So to answer your question, yes, it stinks, but as long as you smoke, it’ll never bother you.”

We weren’t all that chummy with them after hours, but on the evening of December 16, 1975, I needed a babysitter while my parents attended some holiday party for my mother’s office. I remember that it was a Tuesday night, and for whatever we were doing to amuse ourselves—me talking while they smoked with their eyes rolled up in their heads—all noise had to come to a complete stop at 9:00 central because Miss Angie Dickinson was starring in Police Woman, and they never missed a single episode. Research indicates that the December 16th episode was the 14th one of the second season. Up to that point, I’d never seen a single one, and I had no idea who Angie Dickinson or Earl Holliman were. Miss Dickinson was very pretty, but at 44, she appeared rather long in the tooth to be running around undercover in a halter-top.

At 9:58, we were finally able to speak about things unrelated to the plot just before we’d have to quiet down again for the local news. Thankfully, there was a knock on the door and my parents found me somewhere through the billowing smoke that was thicker than if the house had been on fire. Back in those days, they usually came home from restaurants and holiday parties smelling of smoke, but that night, I was the one who wreaked as though I’d spent a long night in a honky-tonk.

In recent decades, it seems like new anti-smoking laws have gone into effect every New Year’s Day. Della was fortunate to pass away long before that so that she didn’t have to see her favorite activity outlawed and banned from every arena. At this point, she would’ve been confined to some smoker’s lounge in a remote airport, but that would never do, for she believed that air travel was the most dangerous thing on earth.