Mail is finally trickling in, but since Internet streaming is still out of the question, we got satellite service. Cable is not available, but there’s something comforting about living without wires overhead or knowing that thousands of communication lines lurk beneath the soil.

As it turned out, the satellite technician is also a neighbor if you count your neighbor as living six miles away. Out here, we’re considered to be in the same community. As a good neighbor, he fixed some bad wiring for us and kept the dish out of sight, unlike the Internet technician who is not our neighbor and decided to plunk their dish in a more visible spot, which doesn’t seem to improve download speeds.

As he was finishing up, Karl mentioned how beautiful the area is and wondered how we’d found it coming from out of state. Once he understood a Realtor had shown it to us, he asked if we’d experienced any of the locals. At that point, we’d only met two postmasters and our closest neighbors, fellow Southern Californians whom we like very much. The ex-Californians had explained their difficulty in getting to know other neighbors, but they had not gone into great detail. Karl filled us in.

As a friend recently reminded me, placing “Apostolic” in front of anything is usually a bad sign. I’d researched area churches, and I knew that there would be a drive involved if you want something other than Nazarene or Jehovah’s Witness. I had seen a closed gate with the name of an apostolic variety of something or other, and decided it was some sort of rebellious congregation protesting the changes of Vatican II. Their biggest differences from the mainline denomination were likely archaic prayer book language and the minister facing the wall to say the communion prayers. Boy, was I in for a shock!

I’ve joked that after the Internet and the post office confusion, it’s like living an episode of Green Acres at times. I’d have to add that this apostolic ingredient makes me wonder if we’re closer to living in M. Night Shyamalan’s The Village. I like to imagine that the writers for both the series and the film got together in a room with the Children of the Corn folks and came up with this crazy plot adjacent to our property. 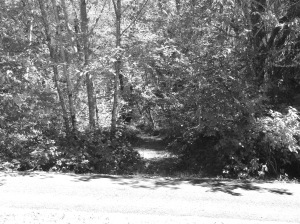 Down this path may be lives lived in black & white with no varying shades of gray.

Someone asked me if we were in any sort of danger. From what I understand, they’re separatists. As far as any of them reading this and coming after me, the Internet is a big sin and it’s unlikely that any of their most faithful would ever see what I have to say. After researching them on Wikipedia, I discovered that we have moved next door to the largest North American concentration. There aren’t that many to begin with, so even the largest concentration is still smaller than a Houston mega-church.

The biggest downside is their Internet restrictions are probably the main reason there’s no demand for reliable high-speed service. On the other hand, their views on birth control keeps the schools going and the sales-tax revenue high.

They were founded because some philosopher a hundred years ago got it into his head that John Calvin and Martin Luther were nothing but freewheeling ne’er-do-wells on the fast-track to Hell. He tightened the reins, which brings us to today’s severity.

Wikipedia has quite a bit of information, but as with all religions, there’s a blog written by a disgruntled former member. I found more here than anywhere else. No makeup, no slacks (for women), no birth control, no TV, no Internet, and no beards (on men).

Our neighbor provided a good profiling tip: If I see a local woman in a dress with upswept hair and no makeup do not automatically assume she’s one of them until I check for jewelry.

Karl mentioned that he’d had customers among the faithful who’d requested their satellite dishes be installed in the attic so fellow congregants wouldn’t know they were watching TV. Since the Internet blogger had commenters who’d refuted her statements, we can assume there are other rule-breakers in their midst. I believe we’ll have no trouble, but if this is my last blog for a while, you can assume they came with pitchforks in the night.

4 thoughts on “There Goes the Neighborhood”