When we said goodbye to the house in Los Angeles County, there were two things I knew I’d miss more than anything though they could never entice me to stay. One was a distinctive pink bougainvillea, which I’d planted eight years before. It was a little thing when I dug that hole, but it flourished in direct sunlight and spread across the back wall to soften and conceal the sharp brick edges. The other object was a Eureka lemon tree, which provided an enormous bounty once everyone kept their hands off it and left its care to me.

Jessica Mitford once recounted how she and her first husband never paid their electricity bill in London when they lived there before World War II. She felt electricity should be free. I rather agree, but with a well and fruit trees have added water, lemons, apples and nuts to the list of things we shouldn’t have to pay for. 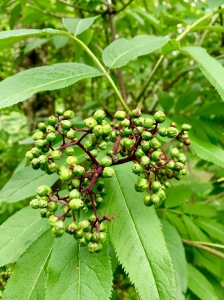 Elderberries as they appear in late May.

It’s been a year since we first laid eyes on Elderberry End, the name selected by the previous owners. Not having an idea what an elderberry shrub looked like, I couldn’t answer the question when people asked me about the name. “Are there lots of elderberries there?” I didn’t know. So many of the areas were overgrown, and our August move-in days were filled with so much to do that I never got a good look around until Labor Day. I could only identify what I knew, and I realized there was much I didn’t know.

If there had ever been any clusters of berries dangling from these trees with their distinctive leaves, the birds had surely been the ones to explore the thickets and take advantage of the bounty.

We started clearing things out during the winter, and though we have years of work in store for clearing out more, I ran across the occasional odd tree. It rises from the ground with several branches, but there were no leaves in winter to know what it was. The bark looked similar to a fruitless mulberry, and the canes were easily cut to form arches in these clearings as I imagined people taking walks and stopping to admire this plant, which had me wondering if it were something tropical and invading this northwestern rain forest.

Ronald from Louisiana visited in May, and he is one of my friends who possess tremendous gardening knowledge, especially when it comes to edibles. He spotted the most prominently placed elderberry, and then I was able to show that they were everywhere. I finally understand why our place name was chosen, and I’m feeling no urgency to think of something new.

The bougainvillea in California, eight years after planting.

Ronald provided some tips on harvesting and using the elderberries if we can get them at the right time before the birds take them. I remembered I have a book by Nigel Slater called Ripe, which I highly recommend. It’s a companion book to his Tender, and both books provide culinary ideas for those who are planning orchards, vegetable gardens or just love reading and looking at photos of beautiful food. Ripe has several ideas for the fruit, including fritters of battered and fried elderberries dipped in sugar. I might consider lifting the frying ban to try them, but there are other ideas I can put to use.

One of the reasons I enjoy Nigel Slater’s books is his frankness (“No one should actually plant one of these trees.”) and his way of describing the simplest things: “The smell of the [elderberry] blossom is, like that of spreading lavender honey on hot toast, the essence of the English summer Miss Marple might have known.” I’m now anticipating these tart berries, and all the things I can do with them.

After Ronald, Bruce was among our next set of visitors, and having grown up in this region of the country, he reminisced about native plants, which he hadn’t seen for a long time. I asked him about a tree I couldn’t figure out, and he thought it might be some sort of nut. The leaves match the ones in my guide to native plants, and it seems we have a couple of hazelnuts, which had gone undiscovered until we removed some problematic trees in the vicinity.

Ripe has a few suggestions for the nuts “If you can manage to get them before the squirrels.” The apple tree, which produced only three mushy apples last year, received some special pampering, and the spring bloom was amazing. I can already see the apples for this tall specimen. Harvesting will require a long pole with a basket, but I’m looking forward to all the ways to enjoy the fruit. Like everything else, we’ll have to harvest before our friends in the forest take everything.