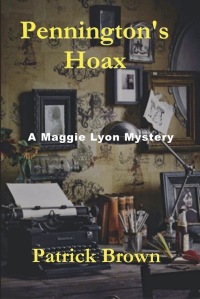 About a year ago I had the pleasure of introducing Maggie Lyon to readers who picked up a copy of Murdered Justice and learned how this food-writing sleuth stumbled across a famous dead body after an exclusive Los Angeles dinner party.

Since Maggie revealed United States Supreme Court Justice Scarpia’s murderer, she’s been busy. We meet her again in Pennington’s Hoax just after the promotional tour for her book about Scarpia comes to an end. Finally recognized as an investigative journalist, she’s now a regular on cable news, and she’s found a new mystery to solve.

There were a few weeks she spent alone in her apartment with nothing to do, but a long lunch with her literary agent provides an unusual opportunity. Maggie learns from the loose-lipped Rina Akin about a new client. It’s none other than reclusive author Ely Pennington who wrote Rebel’s Last Yell about 50 years ago, and is about to come out of retirement with a sequel. This is the biggest literary event in decades, and would Maggie do Rina the favor of reading the manuscript and perhaps writing a review?

Every high school student or college freshman has been assigned Rebel’s Last Yell to read (and if not, there’s a chapter in Pennington’s Hoax to refresh your memory), and everyone who’s read it knows that it was Pennington’s only novel. Actually, it was her only known literary work. She never published short stories, poems, or even a letter to the editor after going into seclusion around 1965.

That’s about the time she split up with childhood friend Garvin Canfield who authored Before the Gallows. Fewer people have read Garvin’s famous book—a fictionalized version of real events made into a movie by the same name. Garvin loved celebrity, but he made a few enemies while rising in the literary world. Cranking out novels and short stories was evidently much easier for him than it was for Ely. Some even speculated that he wrote her famous novel and let her take all the credit (and the money), but neither of them ever spoke publicly if that were the case.

Maggie tells her friend Andrew Campton about how terrible Ely’s new book is, and at a dinner party she first hears the rumors that Ely was a fraud. Andrew, who is always looking for interesting subject matter for his CNN show, sends Maggie to New Orleans to interview Ely and find out the truth about her writing career. Strangely enough, the ninety-something Ely passes away in her sleep before Maggie can confront her on national television. Ely’s death, however, doesn’t prevent Maggie from wanting to solve Pennington’s Hoax, but it seems there aren’t many people left from those days to talk about it.

Maggie gets conflicting information from her various sources, and ends up with more questions than answers. While trying to get to the bottom of Pennington’s Hoax, Maggie realizes that there was a murder and ends up fleeing New Orleans in the middle of the night, but coming home to New York doesn’t keep her out of harm’s way. Readers may recall the ominous threats made at the end of Murdered Justice, but Maggie hasn’t forgotten—the threats and the man who made them! 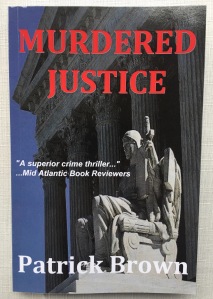 “Murdered Justice” from W&B Publishers is available at Amazon