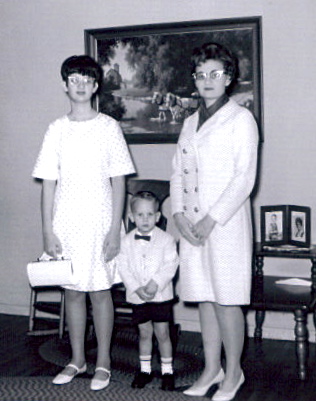 Innocent and dressed for church (center), I still knew all the popular catch-phrases on  NBC’s Laugh-In.

When you read the next few paragraphs, you’ll question my upbringing, but I promise that I wasn’t the least bit neglected. It’s just that I was the youngest child, and parents are more relaxed when they see that their earlier experiments turned out so well. In my case, there was more on TV than when my sister was the same age, and what the networks allowed in Prime Time was much different when I was in pre-school.

Without giving away our ages too quickly, my sister was probably watching Red Skelton, Jack Benny, Ed Sullivan and Beaver Cleaver. Television then got a little wilder for the next few years. Gone were the longer skirts of Mrs. Cleaver to be replaced by the mini of Marlo Thomas. It was recently brought to my attention that Mr. Rogers Neighborhood, while undoubtedly the most wholesome television show ever produced, premiered the same year as Laugh-In.

In those days, the state of public television in my neck of the woods was sorely lacking, and I didn’t even know about Mr. Rogers until I had outgrown his target audience. No one that I knew ever talked about him, but I was such a regular viewer of the questionable comedy show airing on Monday nights that I knew all the catch-phrases: “Verrrry interesting,” “Here comes the judge,” “That’s the truth,” and “Sock it to me!”

I was intrigued by the joke wall and often wondered how I might empty out lower kitchen cupboards and hide behind doors so that I could pop out and be funny. This colorful world of miniskirts, go-go dancing, and short comedy bits held my attention even though for years I didn’t understand most of the jokes, and kids my age didn’t even understand what I was referencing in our play.

I lived for the moment when I could fill a bucket with water to toss on my cousin after convincing her to say “Sock it to me!” but she would never take my stage directions properly. She seemed to be avoiding my cue while suspecting that I was up to no good with that suspicious looking garden hose.

I’m still not all that familiar with Mr. Rogers. I know there were sweet songs, puppets that didn’t move their mouths, a message about acceptance and respect, and the changing of shoes and sweaters. The truth is that I spent my time thinking about Gary Owens with his hand over his ear, that Lily Tomlin was both a little girl in a rocking chair and a telephone operator, and I lived to watch Joanne Worley wearing feathers and beads during the latest “The Party” sketch. Her punch-lines were incomparable, and something to the effect of, “If you like downtown Burbank, you’re going to LOOOOVE Paris!”

Television was such an influence on my life, and I still retain so much of what I saw back then. We had a lot of westerns playing in our house, but I was always more attuned to the background than what was happening with the plot. One morning when my mother was working in the kitchen, I was about four and pulling bottles from one of the lower cabinets. I had aligned unopened bottles of catsup, Worcestershire sauce, a steak sauce and a couple of soda bottles. She was stirring something (it may have been the summer that she made peach jam) and glanced over: “What are you doing?” she asked. I can’t imagine what she thought I was doing with my imagination. Aligning rockets since it was the Space Age? Without looking up and very matter-of-factly, I replied, “Playing saloon.”

Even that response didn’t seem to affect my viewing habits, but I’m sure it raised her eyebrows. Even if my favorite shows had been suddenly banned, I would probably have tried finding a way to watch. I couldn’t un-see what I’d already seen, and even though I wouldn’t know the joke behind Tyrone Horneigh (pronounced “hor-NIGH”) for years and years, there seemed nothing wrong with watching Ruth Buzzi in a hairnet beating him over the head with her purse week after week. At age four I could understand that he was a masher even though I didn’t comprehend what being a masher meant. Nor could I have understood the complexities of the future #MeToo movement and why women needed to defend themselves in the first place.

Laugh-In is tame by today’s standards, but for some who watched it, they felt like they were getting away with something. Though I did not see Mr. Rogers during my formative years, I don’t think I turned out too depraved. I try to use good manners and remember the importance of every individual (even though I have to be honest that this notion is more difficult with certain individuals). However, PBS really should have me on during funding drives and testifying before Congress during budget talks on educational television for I am a cautionary tale.

5 thoughts on “Mine Is a Cautionary Tale”